A Biographical Dictionary of the Qin, Former Han and Xin Periods (221 BC - AD 24) Online 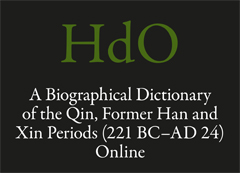 This is a unique and conclusive reference work about the 6,000 individual men and women known to us from China’s formative first empires. Over decennia Michael Loewe (Cambridge, UK) has painstakingly collected all biographical information available. Not only those are dealt with who set the literary forms and intellectual background of traditional China, such as writers, scholars, historians and philosophers, but also those officials who administered the empire, and the military leaders who fought in civil warfare or with China’s neighbours. The work draws on primary historical sources as interpreted by Chinese, Japanese and Western scholars and as supplemented by archaeological finds and inscriptions. By devoting extensive entries to each of the emperors the author provides the reader with the necessary historical context and gives insight into the dynastic disputes and their far-reaching consequences. No comparable work exists for this important period of Chinese history. Without exaggeration a real must for historians of both China and other cultures.