A Student’s Dictionary of Classical and Medieval Chinese Online 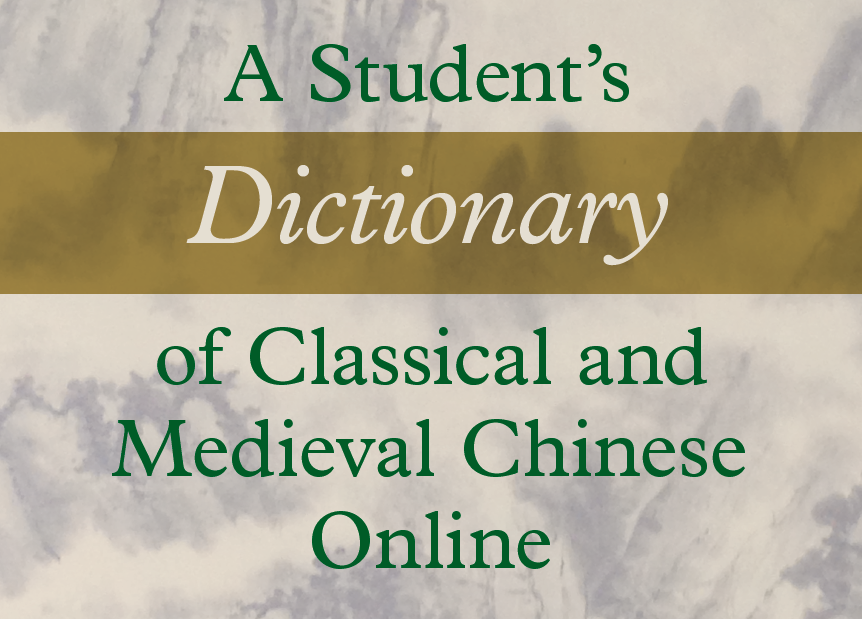 A Student’s Dictionary of Classical and Medieval Chinese Online is the Chinese-English resource of choice for all those reading Chinese texts from the period of approx. 500 BCE to 1000 CE.

Also for those with a background in either modern Chinese or Japanese, the dictionary is a reliable guide in solving countless problems of interpretation.

This is the first Chinese-English dictionary devoted solely to the premodern language. Being a practical lexicon of more than 8,300 characters, arranged alphabetically by Pinyin romanization, it is meant to facilitate the reading and translating of historical, literary, and religious texts dating from approximately 500 BCE to 1000 CE. Primarily a dictionary of individual characters (zidian 字典) and the words they represent, in addition to single-graph entries it includes an abundance of alliterative and echoic binomes (lianmianci 連綿詞) as well as accurate identification of hundreds of plants, animals, and assorted technical terms in various fields. It is the English-language resource of choice for all those seeking assistance in reading texts dating from the Warring States period through the Tang dynasty.

Previous Chinese-English dictionaries have persistently mixed together without clarification all eras and styles of Chinese. But written Chinese in its 3,000 year history has changed and evolved even more than English has in its mere millennium, with classical and medieval Chinese differing more from modern standard Chinese than the language of Beowulf or even that of Chaucer differs from modern English. This dictionary takes the user straight into the language of early and medieval texts, without the confusion of including meanings that developed only after 1000 CE. An added feature of the dictionary is its identification of meanings that were not developed and attached to individual graphs until the medieval period (approximately 250-1000 CE), setting these off where possible from earlier usages of the same graphs. A unique feature of the dictionary is the inclusion of the Middle Chinese reconstructed pronunciation of every word.

A Student’s Dictionary of Classical and Medieval Chinese is a long-desired advance in lexicography. Those who have, or are acquiring, a basic understanding of classical grammar, whether approaching the language from a background either in modern Chinese or in Japanese, will find that it eases their labors appreciably and helps to solve countless problems of interpretation. In offering English translations of an unprecedented precision and richness, the dictionary will be of particular value to students and scholars with a mother tongue other than English.

The dictionary has an index by radical and stroke count. It also contains various appendices, including one with reign eras and exact accession dates of emperors from the Han through Tang dynasties, given according to both Chinese and Western calendars.